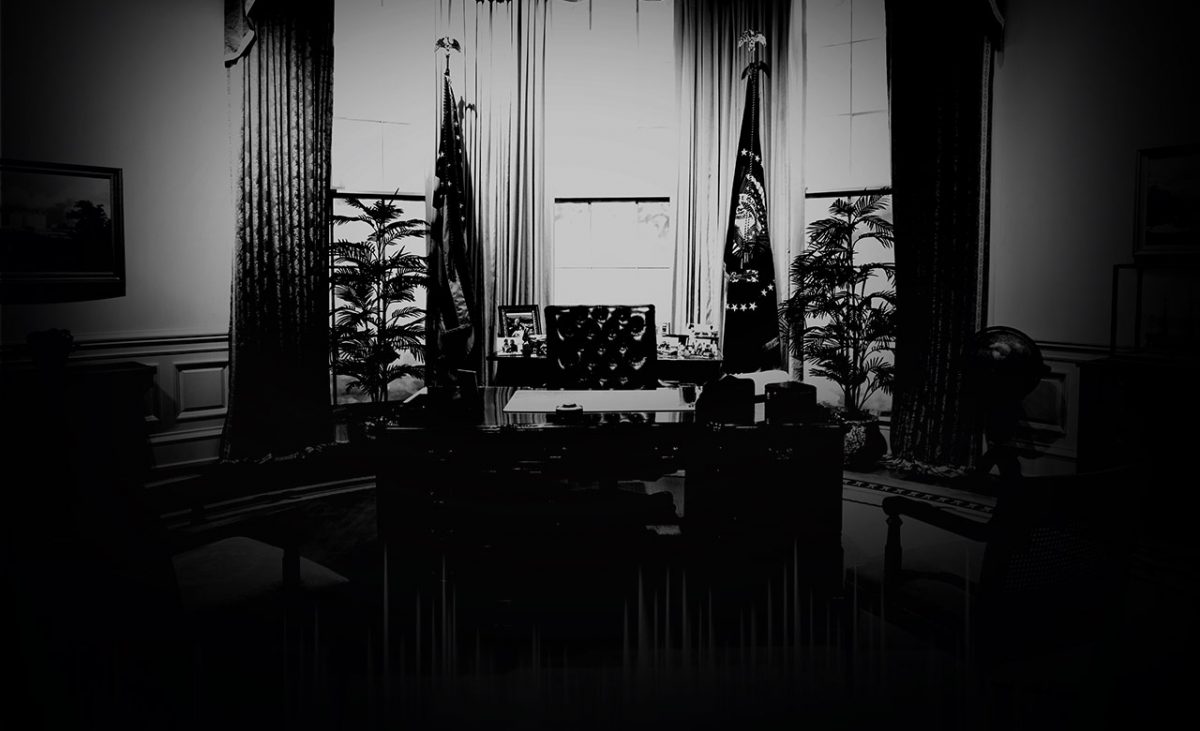 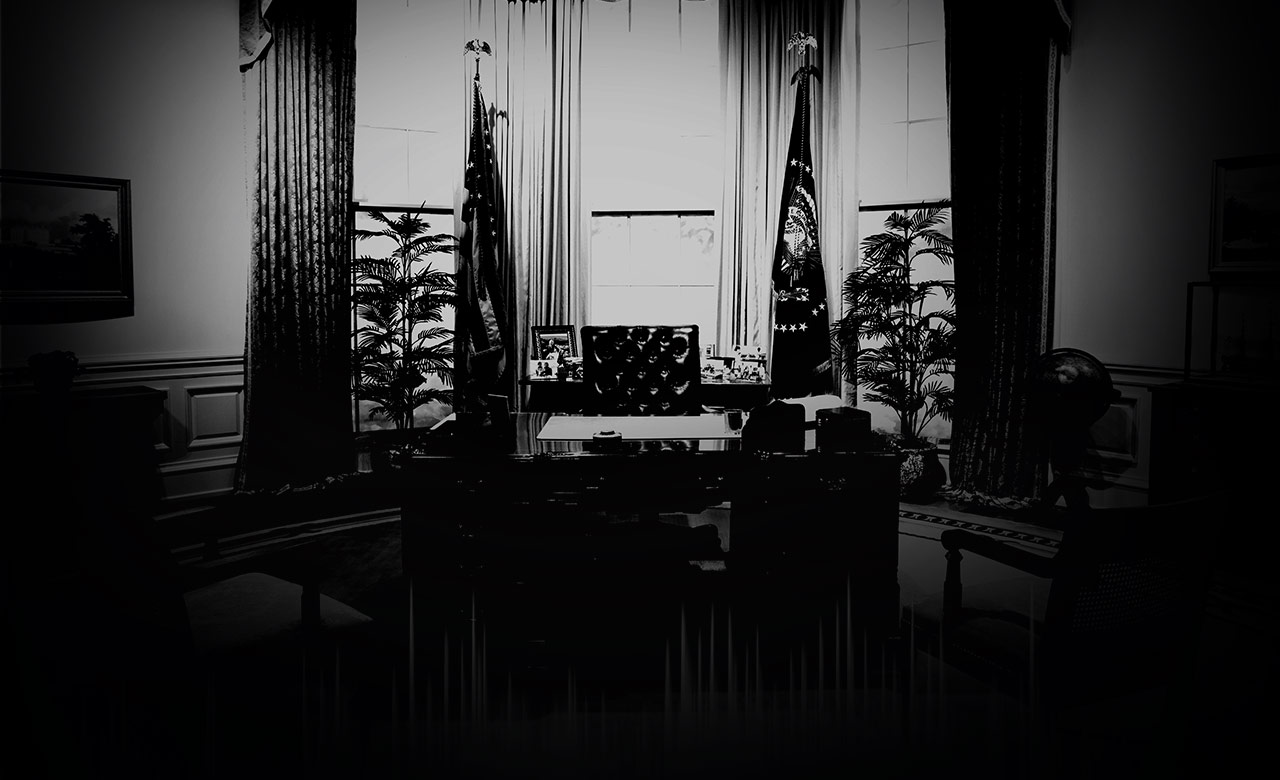 NEW YORK – August 15, 2018 – Cadence13 continues to build a diverse roster of premium programming with the announcement of The Oval Office Tapes, in partnership with Blumhouse Television, the company who brought audiences “Whiplash”, “Get Out” and “The Purge” franchise. Premiering in September, The Oval Office Tapes, Season One, will be a 10-episode dramatic podcast that imagines, What if that soccer ball Vladimir Putin gave to President Trump was covered in microscopic microphones? And what if President Trump insisted on keeping the ball in a place of great honor in the Oval Office?

Created by award-winning filmmaker R.J. Cutler (THE WAR ROOM, THE SEPTEMBER ISSUE, NASHVILLE) and relying on the remarkable moment of journalistic reporting (and insider leaking) that we find ourselves in, each episode will be written and produced in real time, based on events and news of the week. Showrun and co-written by screenwriter, author, and political reporter Scott Conroy (EMBEDS, VOTE FIRST OR DIE, SARAH FROM ALASKA), The Oval Office Tapes will take listeners behind-the-scenes of a top story in the news in ways that they couldn’t access otherwise (or at least until Robert Mueller wills it so). The series will feature all of your favorite Trump administration figures, family members, best friends and enemies. The show reunites Cutler, alongside series co-producer Trevor Smith, and Mary Lisio, EVP Alternative and Non-Scripted Programming at Blumhouse Television, all of whom previously worked together at Cutler’s Actual Reality Pictures. Chris Dickie, VP of Development at Blumhouse Television will also oversee the project.

“When a company like Blumhouse enters the podcast space, you know it’s going to be innovative, compelling and engaging. This is a project that will undoubtedly change the podcast landscape and we can’t wait for people to listen to something so fresh, smart and wildly entertaining,” said Chris Corcoran, Cadence13’s Chief Content Officer.

“Podcasts are exploding in popularity and bringing in more listeners today than ever before,” said Lisio. “The Oval Office Tapes is not only a well-suited extension for the Blumhouse Television brand but represents an exciting new direction for us to bring engaging audio-based storytelling to an ever-growing medium, that’s just as creative as any film or television show.”

“There are no NDA’s on The Oval Office Tapes,” said Cutler. “Tired of the same old story being regurgitated on your favorite cable channel? Frustrated by Sarah Sanders refusal to say anything of substance in her occasional press briefing? Driven to a near-stroke trying to make sense of Rudy Giuliani’s latest proclamation? Here’s a chance to go behind the events in the news and to hear what was really going on when Trump and his gang discussed the matter in the Oval. Thankfully Cadence13 and Blumhouse TV are here to share the Tapes with the public.”

Look for The Oval Office Tapes podcast series to be available on Apple Podcasts, Spotify, Google Play, and other on-demand audio platforms on September, 14, 2018, with new episodes of season one being released every week.

Blumhouse Television is the latest venture from Jason Blum, founder of Blumhouse Productions, which is widely recognized for its pioneering model of producing high-quality low-budget films including “The Purge” franchise, Academy Award-winning films “Whiplash,” and “Get Out.” Blumhouse Television launched as an independent studio in 2017 with funding from ITV Global Entertainment. Projects currently in production include a series for USA/Syfy; “The Purge,” from writer/director/producer James DeMonaco based on the popular film franchise of the same name for USA/Syfy; “Into The Dark,” a first-of-its-kind 12 episode monthly horror anthology series for Hulu; and “Secure and Hold,” a limited series for Showtime based on journalist Gabriel Sherman’s reporting on former Fox News chief, Roger Ailes, with Tom McCarthy writing and executive producing. Blumhouse currently has a six-part documentary series in production for each of FX, Shudder, and Oxygen. “Sharp Objects,” a limited series from Marti Noxon and Gillian Flynn for HBO based on Flynn’s best-selling novel of the same name, starring Amy Adams and directed by Jean-Marc Valle is currently on HBO; “Sacred Lies,” a ten episode series from Raelle Tucker and Scott Winant based on the popular YA novel by Stephanie Oakes is currently on Facebook Watch. Blumhouse Television has earned critical acclaim and numerous honors for its dark, edgy fare including Emmy awards for its productions of HBO’s “The Normal Heart” and “The Jinx,” as well as the prestigious Peabody award for “The Jinx” and the documentary “How to Dance in Ohio.” “This is Home” garnered the World Cinema Documentary Competition’s Audience Award at the 2018 Sundance Film Festival. Its documentary “Bathtubs Over Broadway” was awarded the Albert Maysles New Documentary Director Award at the 2018 Tribeca Film Festival and won the Documentary Feature Audience Award at 23rd annual Nantucket Film Festival.

Cutler Productions is the production company founded by award-winning producer and director R.J. Cutler, who has made some of the most significant documentaries and television series of the past quarter century. Cutler’s documentary features include The War Room, A Perfect Candidate, The September Issue, The World According to Dick Cheney, Thin, Listen to Me Marlon and the upcoming John Belushi Movie. He has also been a pioneer in the area of non-fiction television, having created such landmark programs as American High, Freshman Diaries, Black/White, 30 Days and many others. Cutler’s scripted work includes conceiving and directing the television series Nashville, and directing the feature film If I Stay, starring Chloe Grace Moretz. Cutler has been nominated for an Academy Award and he is the recipient of two Emmys, two Peabody Awards, a GLAAD Award, two Cinema Eye Awards, and two Television Academy Honor Awards. In 2009, the Museum of Television and Radio held a four-day retrospective of his work.